Jeff Barr, the AWS Blog Guy, recently tweeted about ScottyJS citing it as a method for uploading static sites to AWS for hosting using S3 and Cloudfront. 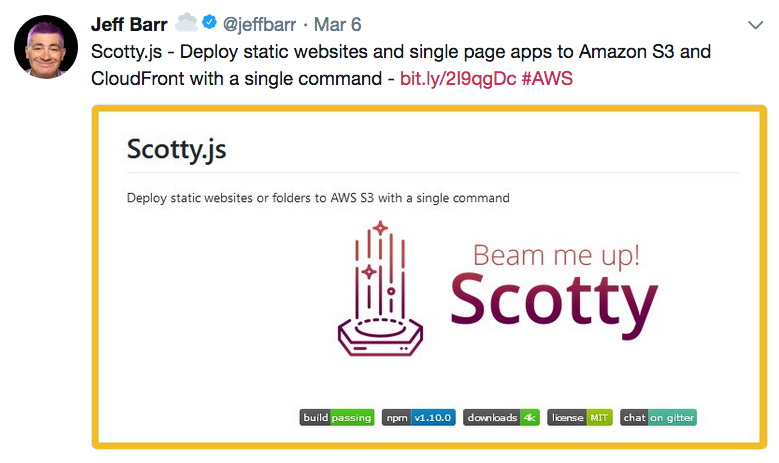 I have been using s3_website for years to handle my static-site uploads to S3, so I decided to do a quick evaluation of ScottyJS.

Scotty is a cool I would like my static website to be in AWS please tool, with a target audience that knows little about AWS under the covers.

s3_website handles uploads to existing S3 buckets and existing cloudfront distributions, meaning that it will leverage the infrastructure you already have while Scotty will create infrastructure for you.

Scotty feels more like a one-time use tool for beginners who just need an easy way to get their website up in to AWS and want to worry about the inner-workings later. S3_website is a full featured tool that, with its ability to create cloudfront invalidations for detected changes, makes it the long-term tool of choice for anybody maintaining a static website on s3 and cloudfront.

So while ScottyJS is very impressive, I will be sticking with s3_website for now.

Installation of the tools